Old and New Methods of Initiation. Lecture 11: Faust and Hamlet; Goethe and Shakespeare 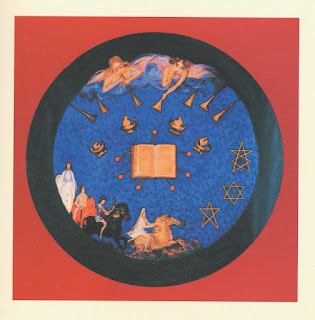 (blue). What he takes in from earlier times, in which the spirit still worked, goes over (red) into a present time which then becomes a factual world evolution.

Then we see in Goethe and Schiller that they had inklings of an earlier time (red) when the spiritual world was still powerful, in the fourth post-Atlantean period, and that they bring this only as far as their spiritual intentions, whereas they see what is taking place on Earth (blue) as being in conflict with it. One thing plays into the other in the human struggle for the spirit. This is why here in Central Europe the question became a purely human one. In the time of Goethe and Schiller a tremendous revolution occurred in the concept of man as a being who stands within a social context. I shall be able to expand on this in the coming lectures.
Let us now look toward the eastern part of Europe. But we cannot look in that direction in the same way. Those who only describe external facts and have no understanding for what lives in the souls of Goethe and Schiller — and also of course many others — may describe these facts very well, but they will fail to include what plays in from a spiritual world — which is certainly also there, although it may be present only in the heads of human beings. In France the battle takes place on the physical Earth, in a political revolution. In Germany the battle does not come down as far as the physical plane. It comes down as far as human souls and trembles and vibrates there. But we cannot continue this consideration in the same way with regard to the East, for things are different there. If we want to pursue the matter with regard to the East we need to call on the assistance of Anthroposophy. For what takes place in the souls of Goethe and Schiller, which are, after all, here on the Earth — what, in them, blows through earthly souls is, in the East, still in the spiritual world and finds no expression whatsoever down on the Earth.
If you want to describe what took place between Goethe's and Schiller's spirits in the physical world — if you want to describe this with regard to the East, then you will have to employ a different view, such as that used in the days of Attila, when battles were fought by spirits in the air above the heads of human beings.
What you find being carried out in Europe by Goethe and Schiller — Schiller by writing Die Räuber (The Robbers) and Goethe by writing Götz von Berlichingen — you will find in the East to be taking place as a spiritual fact in the spiritual world above the physical plane. If you want to seek deeds which parallel the writing of Die Räuber (The Robbers) and the writing of Götz, you will have to seek them among the spiritual beings of the supersensible world. There is no point in searching for them on the physical plane. In a diagram depicting what happens in the East you would have to draw the element in question like a cloud floating above the physical plane, while down below, untouched by it, would be what shows externally on the physical plane.

Now we know that, because we have Hamlet, we can tell how a western human being who had been a pupil of Faust would have behaved, and could have behaved. But there can be no such thing as a Russian Hamlet. Or can there? We could see a Russian Hamlet with our spiritual eyes if we were to imagine the following: Faust lectures at Wittenberg — I mean not the historical Faust but Goethe's Faust, who is actually more true than historical fact. Faust lectures at Wittenberg — and Hamlet listens, writing everything down, just as he does even what the ghost says to him about the villains who live in Denmark. He writes everything down in the book and volume of his brain — Shakespeare created a true pupil of Faust out of what he found in the work of Saxo Grammaticus, [ Note 13 ] which depicts things quite differently. Now imagine that an angel being also listened to Faust as he lectured — Hamlet sat on the university bench, Faust stood on the platform, and at the back of the lecture hall an angel listened. And this angel then flew to the East and there brought about what could have taken place as a parallel to the deeds of Hamlet in the West.
I do not believe that it is possible to reach a truly penetrating comprehension of these things by solely taking account of external facts. One cannot ignore the very profound impression made by these external facts, particularly on the greatest personalities of the time, when what is taking place is something as incisive as the spiritual revolution which took place between the fourth and fifth post-Atlantean periods.