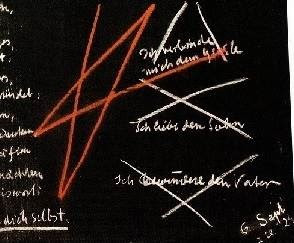 The ordering of the Cosmos is such that even the things which shine out in the greatest beauty, the most lofty splendor, must have their roots in sorrow, suffering, and renunciation. In the background of every beautiful appearance are pain and self-denial. In the universe this is just as inevitable as that the angles of a triangle should add up to 180 degrees. It is mere foolishness to ask why the Gods have not so organized the Cosmos that it would give men pleasure only. They bring about necessities. This was indeed divined in the Egyptian Mysteries, for example. They called the conscious perception of what occurs in sleep — the anxiety; the swinging to and fro between keeping hold of oneself and become powerless; and the standing on the brink of an abyss — the world of the three iron necessities.
These experiences during sleep produce in the human being, again unconsciously, a profound yearning toward the divine which he then feels to be filling, penetrating, permeating, the whole Cosmos. For him, then, the Cosmos resolves itself into a kind of hovering, weaving, ever-moving cloud-formation, in which one is living, able at every moment to feel oneself alive, but at the same time realizing that at any moment one could be submerged in all this weaving and living. A man feels himself interwoven with the weaving, surging movement of the divine throughout the world. And in the pantheistic feeling for God which comes to every healthy human being during waking life there is the aftermath, the consequence, of the pantheistic feeling for God which is experienced unconsciously during sleep. A man then feels his soul to be filled with an inner unconscious conviction, born, one might say, out of anxiety and powerlessness; and filled also with something like an inner force of gravity in place of the ordinary gravity of the physical world.
The Rosicrucian Mystery-teachings gave expression to what comes over a man when he sinks into the realm of the three iron necessities. The experience that would come to the pupils immediately after going to sleep was explained. They were told: Your daytime experiences sink into moving, floating cloud-formations, but these reveal themselves as having the nature of beings. You yourself are interwoven with these clouds, and you hover in anxiety and powerlessness on the edge of an abyss. But you have already discovered what then should be brought to your consciousness in three words — words which should pervade your whole soul: Ex Deo Nascimur. This Ex Deo Nascimur, so vague for ordinary consciousness, but raised into consciousness for students of the new Mysteries, is what a human being first experiences on entering the state of sleep.