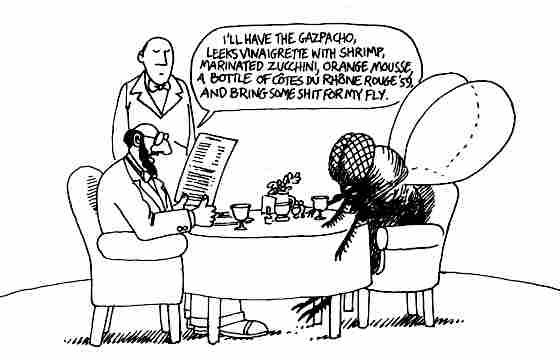 Rudolf Steiner:  "What is outside in nature seems beautiful, and what we see on a corpse when all sorts of parasitic plants are growing out of it does not seem beautiful. But that is only because the one is gigantic in size and the other is small. If we were not human beings but were tiny beetles crawling about on a decaying corpse and could think like human beings, we would regard the bones of the corpse as rocks. We would consider what was decayed as rubble and stones; we would — since we were tiny beetles — see great forests in what was growing on the corpse; we would have a whole world to admire and not think it revolting as we do now. Just as we must go back to what the man was before he died, so, in the case of the Earth and our surroundings, we must go back to what once lived in all that today is lifeless, before indeed the Earth as a whole died. Unless the Earth as a whole had died, there could be no human being. Human beings are parasites, as it were, on the present Earth. The whole Earth was once alive; it could think as you and I now think. But only when it became a corpse could it produce the human race."

Source: The Evolution of the Earth and Man and the Influence of the Stars
Posted by Larry Clark at 6:47 AM