Past, Present, and Future Incarnations. Manifestations of Lucifer and Ahriman 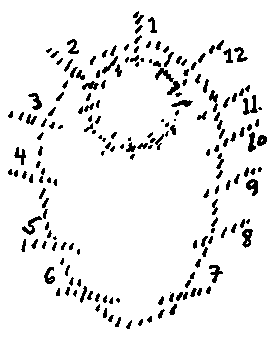 The Riddle of Humanity. Lecture 13 of 15.
Rudolf Steiner, Dornach, Switzerland, August 28, 1916:
In the course of the preceding lectures I have had to say some things that could with justification be called paradoxical. For these things may well sound paradoxical when they are set against the materialism of our day. But that is how matters stand: what calls itself science today is only concerned with the facts that are available to the senses; but knowledge from the other side of the threshold is related to a different region of the world — perhaps it would be better to say, to a different form of the world — from that in which these facts lie. Remember some of the things that we have needed to discuss. Remember how the external human form led us to a description of man's relation to the cosmos. It was said that the structure of the human head — the head as it actually is — could not have developed within the bounds of a life on Earth, and could not even have begun there. It is the result of Moon forces which have been specially adapted to the case of each individual person so that it also refers back to his preceding incarnation. And the rest of the human body, excluding the head, is in turn to some extent being prepared to become the head of the next incarnation. Thus, the human head refers back to a previous incarnation; the human body anticipates the next incarnation, when it will have undergone a transformation. The human Gestalt really does connect directly with the previous incarnation and with the incarnation to come. A great cosmic relationship is revealed when the human being is considered in this light.
As you know, the rudiments of an understanding for the relation of the external human Gestalt to the twelve signs of the zodiac has been preserved from an earlier, wiser age. Although we naturally do not want to speak in the manner of the dilettantism that is so typical of contemporary astrological investigations, something needs to be said about the deep cosmic secrets that lie behind this way of apportioning the parts of the human body to the cosmos.
You know that astrology assigns the human head to the sign of the Ram, the throat and larynx to the Bull, the part of the body where the arms are attached and also what the arms and hands express to the Twins, the circumference of the chest to the Crab, everything to do with the heart to the Lion, the activities contained by the abdomen to the Virgin, the lumbar region to the Scales, the sexual region to the Scorpion, the thighs to the Hunter, the knees to the Sea-Goat, the calves to the Waterman, and the feet to the Fishes.
In this manner the whole human body, including the head, is related to the forces that rule the cosmos and are symbolized by the fixed stars of the zodiac.
Now, we have also spoken of how the head itself is actually a transformation of the whole body — namely of the body of the preceding incarnation. And we find another twelvefold division in the head, where the principal representatives of the sense organs come together. That, too, is a genuine twelvefoldness. The following diagram shows how matters stand.