The Anatomy and Physiology of Truth, Beauty, and Goodness

The Riddle of Humanity. Lecture 4 of 15.
Rudolf Steiner, Dornach, Switzerland, August 5, 1916:
If we set out to compare the way in which people of today speak about matters of the soul and of the body with how the Greeks once spoke of these things, we will discover a time, not very long ago, when the Greeks were much more aware of the relationship between body and soul than is the case today. In so doing, it is extraordinarily important for us to be clear that, given the Greeks' view of the world, a materialistic explanation of the connections between body and soul would have been out of the question. Today, when someone says that this or that convolution of the brain is the speech center, he is thinking about the location of the faculty in a very materialistic way. For the most part, such a person is only thinking of how the speech sounds might be produced, purely mechanically, at some particular place in the brain. Even if he is not explicitly a materialist, at the very least he will think that anyone who wants to understand the real connections must conceive of the act of speaking in more or less materialistic terms. The Greeks could speak much more extensively about the inner connections between body and soul without arousing any materialistic assumptions, for they still felt that the things of the external world could be seen as revelations and manifestations of the spirit.
Today it does not occur to someone who is speaking about the speech center in the brain that this speech center is, in the first instance, built in the spirit. Nor does he think of what is there materially as being a sign or symbol or likeness of the spirit that is behind it and exists quite independently of those spiritual events that are played out in the human soul. The Greeks always saw the entire physically existing human being as a likeness and a symbol of the supersensible spiritual reality that stands behind him. It must be conceded that most people of today would not find such a conception at all easy, for even though we may not want them, many materialistic notions have adhered to our souls. Just consider what was said in the last lecture about how a person's head has actually been formed in the spiritual world, how its source is in the spiritual world, and how, essentially, it was prepared in the spiritual world in the time between the previous death and this birth. These days, it would be astonishing to meet someone who does not say ‘We know for certain that the head is formed in the mother's body during the time of pregnancy; it is mad to say that it is really formed during the long period between the last death and this birth or conception.’ Anyone who thinks in wholly materialistic terms — ‘thinks naturally’, one is almost bound to say — must view these aforementioned assertions as a form of madness.
But, as you shall see, if you picture matters in the manner of what follows, it will nevertheless be possible for you to arrive at the appropriate thoughts.
Naturally, prior to conception everything to do with the head is invisible. No meteor descends from the heights of heaven to lodge in the mother's body — of course not. But the forces required for the human head, namely, the forces that form and shape it, are active during the time between death and a new conception. Think of it as a more or less invisible, but already shaped, head. Of course, when I use lines to draw it, they represent something invisible. Only forces are present. 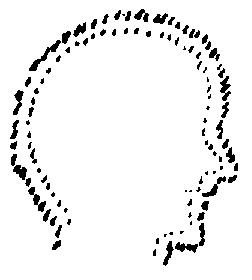 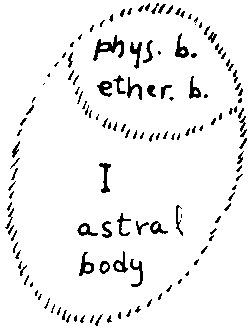 Thus one really can say that when we look at a person's head the most prominent and most important things to be seen are those that have been pressed outward into the physical and etheric bodies. If we look at the rest of the body, the most important things are the impulses and forces that are at work in it. These originate in the I and the astral body. Therefore when you contrast the head, on the one hand, with the rest of the body on the other, it is the physical and etheric bodies that are relatively prominent in the head, whereas the astral body and the I that flow through it remain relatively independent. With the rest of the body it is the I and the astral body that are directly at work in the physical processes, whereas the remaining members are only present as the basis of an invisible framework — a physical and etheric framework that is not normally even considered. The place where the I is really present is in the circulation of the blood.
And now what about the part we could call the moral-etheric aura? First of all, this part works on the entire human being. But it works on the I and the I works on the bodily part of man — for example in the blood. As we saw, the most important thing in the blood is the I. Morality affects the blood. You should not concentrate too much on the physical aspects of the blood; the physical blood is only there to occupy, so to speak, a position in space where the forces of the I can work. Instead, consider the blood in the light of what I have described. Morality, therefore, affects the I. In the blood, the forces of the I encounter the forces of morality. This is true for the man who stands here in the physical world: there is a spiritual encounter between what pulses in his blood and the moral forces that radiate into it. In the course of this encounter, the really moral impulses drive out what otherwise would emanate from the blood. Picture this as the bloodstream: the I flows in it and morality is at work there, too. 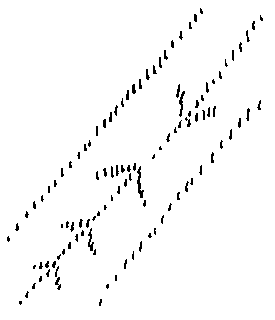