The Twelve Human Senses and the Seven Life-Sustaining Processes 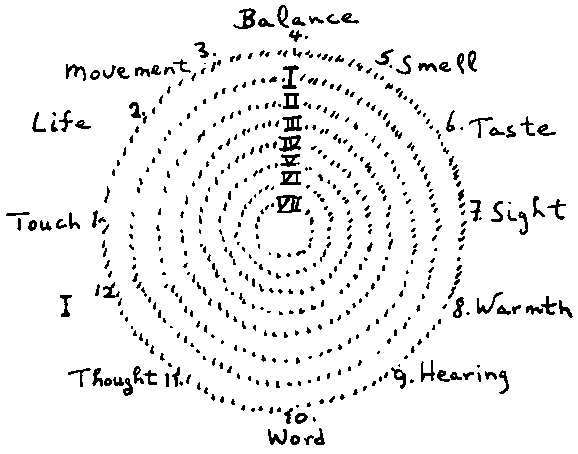 The situation of these powers of perception is different from the situation of forces that could be said to reside more deeply embedded within us. Seeing is bound up with the eyes and these constitute a particular region of a human being. Hearing is bound up with the organs of hearing, at least principally so, but it needs more besides — hearing involves much more of the organism than just the ear, which is what is normally thought of as the region of hearing. And life flows equally through each of these regions of the senses. The eye is alive, the ear is alive, that which is the foundation of all the senses is alive; the basis of touch is alive — all of it is alive. Life resides in all the senses; it flows through all the regions of the senses.
If we look more closely at this life, it also proves to be differentiated. There is not just one life process. And you must also distinguish what we have been calling the sense of life, through which we perceive our own vital state, from the subject of our present discussion. What I am talking about now is the very life that flows through us. That life also differentiates itself within us. It does so in the following manner.