Anthroposophy is the elixir of life!
"Dr. Steiner's Mind-Blowing Awesome Sauce! Too Much Ain't Enuff!" 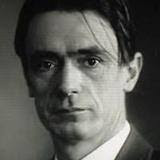