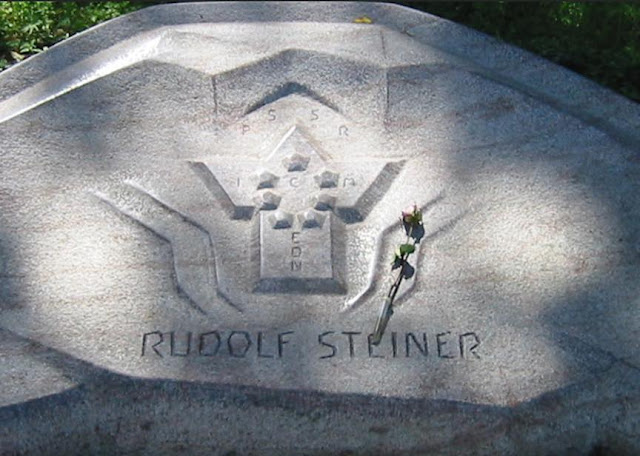 The Bridge Between Universal Spirituality and the Physical Constitution of Man. Lecture 3 of 3.
Rudolf Steiner, Dornach, Switzerland, December 19, 1920:

Just as we attain freedom by irradiating the life of thought with will, so do we attain love by permeating the life of will with thoughts. We unfold love in our actions by letting thoughts radiate into the realm of the will; we develop freedom in our thinking by letting what is of the nature of will radiate into our thoughts. And because, as human beings, we are a unified whole, when we reach the point where we find freedom in the life of thought and love in the life of will, there will be freedom in our actions and love in our thinking. Each irradiates the other: action filled with thought is wrought in love; thinking that is permeated with will gives rise to actions and deeds that are truly free.
Thus you see how in the human being the two great ideals, freedom and love, grow together. Freedom and love are also that which we, standing in the world, can bring to realization in ourselves in such a way that, through us, the one unites with the other for the good of the world.
We must now ask: How is the ideal, the highest ideal, to be attained in the will-permeated life of thought? — If the life of thought were something that represented material processes, the will could never penetrate fully into the realm of the thoughts and increasingly take root there. The will would at most be able to ray into these material processes as an organizing force. Will can take real effect only if the life of thought is devoid of outer, physical reality. What, then, must it be?

You will be able to envisage what it must be if you take a picture as a starting point. If you have here a mirror and here an object, the object is reflected in the mirror; if you then go behind the mirror, you find nothing. In other words, you have a picture — nothing more. Our thoughts are pictures in this same sense. How is this to be explained? — In a previous lecture I said that the life of thought as such is not a reality of the immediate moment. The life of thought rays in from our existence before birth, or rather, before conception. The life of thought has its reality between death and a new birth. And just as here the object stands before the mirror and what it presents is a picture — only that and nothing more — so what we unfold as the life of thought is lived through in the real sense between death and a new birth, and merely rays into our life since birth. As thinking beings, we have within us a mirror reality only. Because this is so, the other reality which, as you know, rays up from the metabolic process, can permeate the mirror pictures of the life of thought. If, as is very rarely the case today, we make sincere endeavors to develop unbiased thinking, it will be clear to us that the life of thought consists of mirror-pictures if we turn to thinking in its purest form — in mathematics. Mathematical thinking streams up entirely from our inner being, but it has a mirror-existence only. Through mathematics the make-up of external objects can, it is true, be analyzed and determined, but the mathematical thoughts in themselves are only thoughts, they exist merely as pictures. They have not been acquired from any outer reality.
Abstract thinkers such as Kant also employ an abstract expression. They say: mathematical concepts are a priori. — A priori, apriority, means ‘existing in the mind independent of experience’. But why are mathematical concepts a priori? Because they stream in from the existence preceding birth, or rather, preceding conception. It is this that constitutes their ‘apriority’. And the reason why they appear real to our consciousness is because they are irradiated by the will. This is what makes them real. Just think how abstract modern thinking has become when it uses abstract words for something which, in its reality, is not understood! Men such as Kant had a dim inkling that we bring mathematics with us from our existence before birth, and therefore they called the findings of mathematics ‘a priori’. But the term ‘a priori’ really tells us nothing, for it points to no reality, it points to something merely formal.

In regard to the life of thought, which with its mirror existence must be irradiated by the will in order to become reality, ancient traditions speak ofsemblance. (Diagram XI, Schein.)
Let us now consider the other pole of man's nature, where the thoughts stream down towards the sphere of will, where deeds are performed in love. Here our consciousness is, so to speak, held at bay; it rebounds from reality. We cannot look into that realm of darkness — a realm of darkness for our consciousness — where the will unfolds whenever we raise an arm or turn the head, unless we take super-sensible conceptions to our aid. We move an arm; but the complicated process in operation there remains just as hidden from ordinary consciousness as what takes place in deep sleep, in dreamless sleep. We perceive our arm; we perceive how our hand grasps some object. This is because we permeate the action with thoughts. But the thoughts that are in our consciousness are still only semblance. We live in what is real, but it does not ray into our ordinary consciousness. Ancient traditions spoke here of Power (Gewalt), because the reality in which we are living is indeed permeated by thought, but thought has nevertheless rebounded from it in a certain sense, during the life between birth and death. (Diagram XI.)
Between these two poles lies the balancing factor that unites the two — unites the will that rays towards the head with the thoughts which, as they flow into deeds wrought with love, are, so to say, felt with the heart. This means of union is the life of feeling, which is able to direct itself towards the will as well as towards the thoughts. In our ordinary consciousness we live in an element by means of which we grasp, on the one side, what comes to expression in our will-permeated thought with its predisposition to freedom, while on the other side, we try to ensure that what passes over into our deeds is filled more and more with thoughts. And what forms the bridge connecting both has since ancient times been called Wisdom. (Diagram XI.)
In his fairy tale, The Green Snake and the Beautiful Lily, Goethe has given indications of these ancient traditions in the figures of the Golden King, the Silver King, and the Brazen King. We have already shown from other points of view how these three elements must come to life again, but in an entirely different form—these three elements to which ancient instinctive knowledge pointed and which can come to life again only if we acquire the knowledge yielded by Imagination, Inspiration, and Intuition.
But what is it that is actually taking place as we unfold our life of thought? — Reality is becoming semblance! It is very important to be clear about this. We carry about with us our head, which with its hard skull and tendency to ossification, presents, even outwardly, a picture of what is dead, in contrast to the rest of the living organism. Between birth and death we bear in our head that which, from an earlier time when it was reality, comes into us as semblance. From the rest of our organism we permeate this semblance with the element issuing from our metabolic processes; we permeate it with the real element of the will. There we have within us a seed, a germinating entity which, first and foremost, is part of our humanity, but also means something in the cosmos. Think of it — an individual is born in a particular year; before then she was in the spiritual world. When she passes out of the spiritual world, thought which there is reality, becomes semblance, and she leads over into this semblance the forces of her will which come from an entirely different direction, rising up from parts of her organism other than the head. That is how the past, dying away into semblance, is kindled again to become reality of the future.
Let us understand this rightly. What happens when we rise to pure thinking, to thinking that is irradiated by will? — On the foundation of the past that has dissolved into semblance, through fructification by the will which rises up from our egohood, there unfolds within us a new reality leading into the future. We are the bearers of the seed into the future. The thoughts of the past, as realities, are as it were the mother-soil; into this mother-soil is laid that which comes from the individ ual egohood, and the seed is sent on into the future for future life.
On the other side, we evolve by permeating our deeds and actions, our will-nature, with thoughts; deeds are performed in love. Such deeds detach themselves from us. Our deeds do not remain confined to ourselves; they become world happenings. If they are permeated by love, then love goes with them. As far as the cosmos is concerned, an egotistical action is different from an action permeated by love. When, out of semblance, through fructification by the will, we unfold that which proceeds from our inmost being, then what streams forth into the world from our head encounters our thought-permeated deeds. Just as when a plant unfolds it contains in its blossom the seed to which the light of the sun, the air outside, and so on, must come, to which something must be brought from the cosmos in order that it may grow, so what is unfolded through freedom must find an element in which to grow through the love that lives in our deeds.