Revisioning the Concept of Space. Qualitative Mathematics, Cosmic Space, and Life on Earth 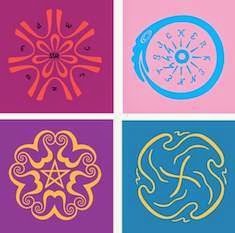 Astronomy in Relation to the Other Scientific Disciplines. Lecture 7.
Rudolf Steiner, Stuttgart, January 7, 1921:

Fig. 2
Diagrammatically now (Fig. 2), let this be the animal form. If after going into an untold number of intervening links in the investigation, you put the question: ‘What is the characteristic difference of the front and the back, the head and the tail end due to?’, you will reach a very interesting conclusion. Namely you will connect the differentiation of the front end with the influences of the Sun. Here is the Earth (Fig. 3). You have an animal on the side of the Earth exposed to the Sun. Now take the side of the Earth that is turned away from the Sun. In one way or another it will come about that the animal is on this other side. Here too the Sun's rays will be influencing the animal, but the earth is now between. In the one case the rays of the Sun are working on the animal directly; in the other case indirectly, inasmuch as the Earth is between and the Sun's rays first have to pass through the Earth (Fig. 3).

Fig. 3
Expose the animal form to the direct influence of the Sun and you get the head. Expose the animal to those rays of the Sun which have first gone through the Earth and you get the opposite pole to the head. Study the skull, so as to recognize in it the direct outcome of the influences of the Sun. Study the forms, the whole morphology of the opposite pole, so as to recognize the working of the Sun's rays before which the Earth is interposed — the indirect rays of the Sun. Thus the morphology of the animal itself draws our attention to a certain interrelation between Earth and Sun. For a true knowledge of the mutual relations of Earth and Sun we must create the requisite conditions, not by the mere visual appearance (even though the eye be armed with telescopes), but by perceiving also how the animal is formed — how the whole animal form comes into being.
Now think again of how the human spine is displaced through right angle in relation to the animal. All the effects which we have been describing will undergo further modification where man is concerned. The influences of the Sun will therefore be different in man than in the animal. The way it works in man will be like a resultant (Fig. 4). That is to say, if we symbolize the horizontal line — whether it represent the direct or the indirect influence of the Sun — by this length, we shall have to say; here is a vertical line; this also will be acting. And we shall only get what really works in man by forming the resultant of the two.

Fig. 4
Suppose in other words that we are led to relate animal formation quite fundamentally to some form of cosmic movement — say, a rotation of the Sun about the Earth, or a rotation of the Earth about its own axis. If then this movement underlies animal formation, we shall be led inevitably to attribute to the Earth or to the Sun yet another movement, related to the forming of man himself, — a movement which, for its ultimate effect, unites to a resultant with the first. From what emerges in man and in the animal we must derive the basis for a true recognition of the mutual movements among the heavenly bodies.
The study of Astronomy will thus be lifted right out of its present limited domain, where one merely takes the outward visual appearance, even if calling in the aid of telescopes, mathematical calculations and mechanics. It will be lifted into what finds expression in this most sensitive of instruments, the living body. The forming forces working in the animal, and then again in man, are a clear indication of the real movements in celestial space.
This is indeed a kind of qualitative mathematics. How, then, shall we metamorphose the idea when we pass on from the animal to the plant? We can no longer make use of either of the two directions we have hitherto been using. Admittedly, it might appear as though the vertical direction of the plant coincided with that of the human spine. From the aspect of Euclidean space it does, no doubt (Euclidean space, that is to say, not with respect to detailed configuration but simply with respect to its rigidity.) But it will not be the same in an inherently mobile space. I mean a space the dimensions of which are so inherently mobile that in the relevant equations, for example, we cannot merely equate the x- and the y-dimensions: y = ƒ(x). (The equation might be written very differently from this. You will see what I intend more from the words I use than from the symbols; it is by no means easy to express in mathematical form.) In a coordinate system answering to what I now intend, it would no longer be permissible to measure the ordinates with the same inherent measures as the abscissae. We could not keep the measures rigid when passing from the one to the other. We should be led in this way from the rigid coordinate system of Euclidean space to a coordinate system that is inherently mobile.
And if we now once more ask the question: How are the vertical directions of plant growth and of human growth respectively related? — we shall be led to differentiate one vertical from another. The question is, then, how to find the way to a different idea of space from the rigid one of Euclid. For it may well be that the celestial phenomena can only be understood in terms of quite another kind of space — neither Euclidean, nor any abstractly conceived space of modern mathematics, but a form of space derived from the reality itself. If this is so, then there is no alternative: it is in such a space, and not in the rigid space of Euclid, that we shall have to understand them.
Thus we are led into quite other realms, namely to the Ice Age on the one hand and on the other to a much needed reform of the Euclidean idea of space. But this reform will be in a different spirit than in the work of Minkowski and others. Simply in contemplating the given facts and trying to build up a science free of hypotheses, we are confronted with the need for a thoroughgoing revision of the concept of space itself. Of these things we shall speak again tomorrow.