HOW WE ROLL: We chase our own tail 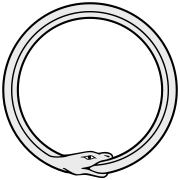 Rudolf Steiner:
For instance, a man may become acquainted, in a certain year of his life, with another man. This is generally considered as accidental. And it really seems as if the two persons had been led together by the accidents of life and become acquainted at a chance moment. Things, however, happen otherwise. If we use the methods of spiritual research and look into the whole connection of human life, […] we then find that an acquaintance made in a man’s thirty-fifth year has been longed for and striven for by this man during his entire life according to a definite plan. If we follow someone’s life from his thirty-fifth year back into his early childhood, we may uncover and reveal what paths were pursued in order to arrive at the point where the other man was encountered. All this has been carried out in accordance with a plan harbored in the unconscious.
If we look at a human being’s destiny in this way, it is remarkable to discover what wiles were occasionally employed by this person in order to arrive at a certain place, in a certain year, and to encounter a certain person. Anyone having real insight into human life cannot help but say that, if someone is undergoing an experience, he himself has sought it, with all the force at his command, during his entire earth-life.

Source: https://rudolfsteinerquotes.wordpress.com/2017/03/09/a-definite-plan/
Posted by Larry Clark at 6:52 AM