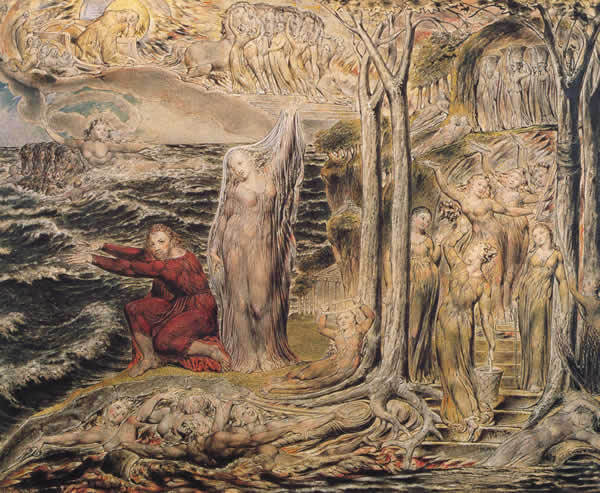 To thee is known
What lies hidden in the deep,
What weaves in air and water
Through mountain and valley.
Thou breathest through The wele of existence;
When heads ponder Thy sense emerges.
It is said that to thee All things are known.

The old consciousness that held sway in Nebelheim cannot be better described than in the words:

My sleep is a dreaming
My dream is a musing
My musing is ruled by wisdom.


The same also applies to Wagner's comprehension of the Holy Grail. We concerned ourselves with the Holy Grail in the previous lecture: “Who are the Rosicrucians?” It is indeed a remarkable fact that at a certain moment there arose in Wagner an inkling of the great teaching that flourished in the Middle Ages. Before that happened, another idea, as it were, prepared the way, but first it led him to create a drama called The Victor; this was in 1856.
The Victor was never performed, but the idea it embodied was incorporated into his Parsifal. The Victor depicted the following:
Ananda, a youth of the Brahman caste, was loved by a Tschandala maiden; because of the caste system he cannot reciprocate the love. Ananda became a follower of Buddha, and he eventually conquered his human craving: He gained victory over himself. To the maiden was then revealed that in a former life she was a Brahman and had overcome her love for the youth who was then of the Tschandala caste. Thus, she too was a victor. She and Ananda were spiritually united.
Wagner renders a beautiful interpretation of this idea, taking it as far as reincarnation and karma in the Christian-Anthroposophical sense. We are shown that the maiden herself, in a former life, brought about the present events. Wagner has worked on this idea in 1856.
On Good Friday, 1857, he was sitting in the Retreat, “the sanctuary on the green hill.” Looking out over the fields watching the plants come to life, sprouting from the earth, an inkling arose in him of the Power of the germinating force emerging from the earth in response to the rays of the sun: a driving force, a motivating force that permeates the whole world and lives in all beings; a force that must evolve, that cannot remain as it is; a force that, to reach higher stages, must pass through death. Watching the plants, he felt the force of sprouting life, and turning his gaze across the Lake of Zürich to the village; he contemplated the opposite idea, that of death — the two polar concepts to which Goethe gives such eloquent expression in his poem, Blessed Longing.

And until thou truly hast,
This dying and becoming,
Thou are but a troubled guest
O'er the dark earth roaming.

These words truly show Wagner's deep commitment to the highest ideal a person can set himself: to approach that Spiritual Power that came down to us and lives in our world. When we are worthy, we bring what resounds at the dose of Richard Wagner's Parsifal: Redemption for the Redeemer.