The Zodiac: The forming of the human being through cosmic influences 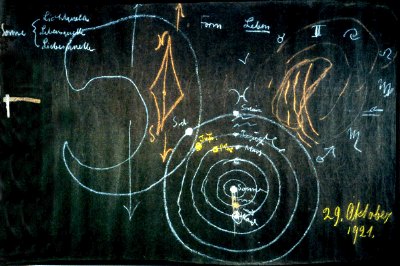 Today we shall study the human being in regard to his form, and from this standpoint widen and deepen what we have recently considered. If we envisage, to begin with, the fact that the human form, of course, depends in the widest sense on the whole life of man, we should then consider first of all man's life as a whole, in order to grasp the human form from within, in a concrete way. To begin with, the human being forms part of the whole universe, of the whole cosmos. And if you bear in mind that in regard to the formation of the head, the human being is in reality an image of the sphere, of the cosmic universe, you will find, as it were, that as regards the head, he is placed into the whole universe. But we can only understand the way in which he is placed into it, and is at the same time a self-contained being, by bearing in mind man's connection with the whole environing world.
Let us first consider the human form by saying: With his whole thinking, insofar as it is connected with the head, man turns toward the whole cosmos, and by bringing his head, through birth, from the spiritual world into physical existence, the human being, enclosed within his body, may in a certain way look back upon his real, inner soul-spiritual being as it existed during the time when he was not enclosed within a body. Perhaps we obtain the best picture of what I mean by this when we consider how the human being attains knowledge by looking back, as it were, into his own self. For when we occupy ourselves with arithmetic and geometry, we look back into ourselves. We recognize the laws of geometry simply because we are human beings able to draw the spatial laws out of our own being. But on the other hand, we know that these laws fill out the whole universe. Consequently, when we look out into the world we have something which we necessarily perceive through the eyes; but everything is arranged geometrically, also the eyes, which are focused geometrically. We may therefore say: insofar as man faces the world with his thinking that is connected with his head, he takes back, as it were, into himself what is spread out in the universe. Let us therefore imagine this first stage of fitting himself into the cosmos by saying: man takes in the universe, he looks back upon the universe, as it were. By looking back upon ourselves, we discover the universe.
This is man's most external connection with the universe out of which he is built.
We proceed further by envisaging in the second place how the human being activates within him what he takes in from outside. Consider that when the child is born, everything which it experienced from death to a new birth lives within its being; if the child could develop a consciousness in this direction, it would be able to look back on the experiences which it had before birth. But these prenatal experiences then begin to be active in the child. The human being does not only look back into his own self in order to discover the universe anew within himself, but he also looks out into the environing world. He sees the world that surrounds him. We may therefore say: He does not only take in the universe, but he looks out into the universe around him and takes in the mobility of the universe. He grows inwardly mobile.
You only need to clasp your left hand consciously with your right one — you only need to touch yourself — in order to remain completely within yourself. You do something with your right hand, but you are taking hold of something which is your own self. You now touch yourself in the same way in which you feel about and touch an external object. Every perception of the ego, of one's inner being, is really based upon this: To take hold of one's own self. We also do it indirectly with the eyes. When we envisage any point outside, the axis of the right eye crosses that of the left eye in the same way in which our hands cross when the right hand clasps the left one. Animals have less inner life because they touch themselves much less. We may therefore say that the third thing is: To experience or touch ourselves. In reality, we are still in the external world when we thus grasp ourselves. We are not yet within our skin.
But let us now envisage the boundary between the outer and inner life. Let us indicate this process by moving the right hand, clasping the left one, up and down, so as to describe a surface. This surface is everywhere on ourselves. With our body's covering sheath we enclose our inner being. We may therefore say that the fourth thing is to encompass ourselves.
If you penetrate in a living way through feeling into your form, insofar as it is enclosed by the skin, you will obtain this process of encompassing yourself.