The Imitation of Christ, by Thomas à Kempis. Book 1, Chapter 13: Of temptations to be resisted 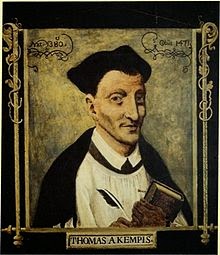 ADMONITIONS USEFUL FOR A SPIRITUAL LIFE
BOOK 1, CHAPTER 13
Of temptations to be resisted
So long as we live in the world, we cannot be without trouble and
trial.  Wherefore it is written in Job, The life of man upon the
Earth is a trial.  And therefore ought each of us to give heed
concerning trials and temptations, and watch unto prayer, lest
the devil find occasion to deceive; for he never sleepeth, but
goeth about seeking whom he may devour.  No man is so perfect in
holiness that he hath never temptations, nor can we ever be
wholly free from them.
Yet, notwithstanding, temptations turn greatly unto our
profit, even though they be great and hard to bear; for through
them we are humbled, purified, instructed.  All Saints have
passed through much tribulation and temptation, and have profited
thereby.  And they who endured not temptation became reprobate
and fell away.  There is no position so sacred, no place so
secret, that it is without temptations and adversities.
There is no man wholly free from temptations so long as he
liveth, because we have the root of temptation within ourselves,
in that we are born in concupiscence.  One temptation or sorrow
passeth, and another cometh; and always we shall have somewhat
to suffer, for we have fallen from perfect happiness. Many who
seek to fly from temptations fall yet more deeply into them.
By flight alone we cannot overcome, but by endurance and
true humility we are made stronger than all our enemies.
He who only resisteth outwardly and pulleth not up by the
root, shall profit little; nay, rather temptations will return to
him the more quickly, and will be the more terrible.  Little by
little, through patience and longsuffering, thou shalt conquer by
the help of God, rather than by violence and thine own strength
of will.  In the midst of temptation often seek counsel; and deal
not hardly with one who is tempted, but comfort and strengthen
him as thou wouldest have done unto thyself.
The beginning of all temptations to evil is instability of
temper and want of trust in God; for even as a ship without a
helm is tossed about by the waves, so is a man who is careless
and infirm of purpose tempted, now on this side, now on that.
As fire testeth iron, so doth temptation the upright man.
Oftentimes we know not what strength we have; but temptation
revealeth to us what we are.  Nevertheless, we must watch,
especially in the beginnings of temptation; for then is the foe
the more easily mastered, when he is not suffered to enter within
the mind, but is met outside the door as soon as he hath knocked.
Wherefore one saith,
Check the beginnings; once thou might’st have cured,
But now ’tis past thy skill, too long hath it endured.
For first cometh to the mind the simple suggestion, then the
strong imagination, afterwards pleasure, evil affection, assent.
And so little by little the enemy entereth in altogether, because
he was not resisted at the beginning.  And the longer a man
delayeth his resistance, the weaker he groweth, and the stronger
groweth the enemy against him.
Some men suffer their most grievous temptations in the
beginning of their conversion, some at the end.  Some are sorely
tried their whole life long.  Some there are who are tempted but
lightly, according to the wisdom and justice of the ordering of
God, who knoweth the character and circumstances of men, and
ordereth all things for the welfare of His elect.
Therefore we ought not to despair when we are tempted, but the
more fervently should cry unto God, that He will vouchsafe to
help us in all our tribulation; and that He will, as St. Paul
saith, with the temptation make a way to escape that we may be
able to bear it.  Let us therefore humble ourselves under the
mighty hand of God in all temptation and trouble, for He will
save and exalt such as are of an humble spirit.
In temptations and troubles a man is proved, what progress he
hath made, and therein is his reward the greater, and his virtue
doth the more appear.  Nor is it a great thing if a man be devout
and zealous so long as he suffereth no affliction; but if he
behave himself patiently in the time of adversity, then is there
hope of great progress.  Some are kept safe from great
temptations, but are overtaken in those which are little and
common, that the humiliation may teach them not to trust to
themselves in great things, being weak in small things.