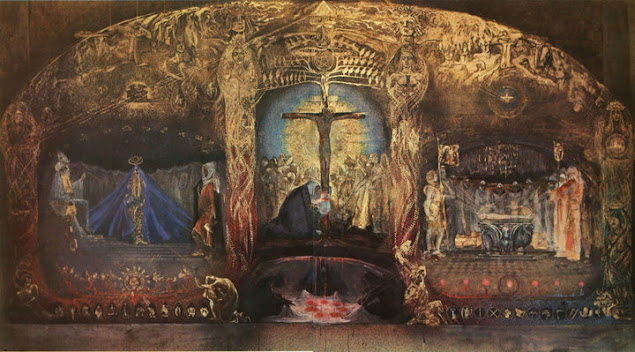 There is another remarkable passage where it is again possible to perceive the methodically artistic manner in which the Gospel veils the occult facts concerned with the evolution of mankind. This passage is again a difficult puzzle for the commentators.

And the next day, as they were leaving Bethany he was hungry.
And from afar he saw a fig tree, which had leaves. So he went to see if he might find something on it. And when he came to it he found nothing but leaves, for it was not the season for figs.
And he began to speak to it: “Never to all eternity shall anyone eat fruit from you!” And his disciples heard it. (Mark 11:12-14.)

Now we should all ask ourselves honestly, “Is it not truly extraordinary that, according to the Gospel, a God should go straight up to a fig tree, look for figs and find none, and then the reason is explicitly given why He did not fmd any — it was not the time for figs — so at a time when there are no figs He goes up to the fig tree, looks for figs and finding none, says, “'Never to all eternity shall anyone eat fruit from you'?”
Now consider the usual explanations given of this story — although the Gospel gives nothing but the dry and prosaic fact that for some strange reason Christ Jesus feels hunger, and goes up to a fig tree at a time when no figs grow. He finds no figs, and then curses the tree, telling it that to all eternity no figs will grow any more on it. What, then is the fig tree, and why is the entire story told here? Anyone who can read occult works first of all will recognize in the fig tree (its connection with the Gospel will be shown later) the same picture as was spoken of in relation to the Buddha, who sat under the Bodhi tree and received enlightenment for his sermon at Benares. “Under the Bodhi tree” means the same as “under the fig tree.” From a world-historical point of view it was still the “time of figs” in respect to human clairvoyance, that is to say it was possible to receive enlightenment as the Buddha did, under the Bodhi tree, under the fig tree. But this was no longer true, and that is what the disciples had to learn. From the point of view of world history it was a fact that there was no longer any fruit on the tree under which the Buddha had received his enlightenment.
And what was happening in all of mankind was mirrored at that time in the soul of Christ. We may see in Empedocles of Sicily a representative of humanity, a representative of many people who were similarly hungry because their souls could no longer discover the revelation that had been given earlier and had to be satisfied with the abstractions of the ego. In the same way that we can speak of the starving Empedocles, we can speak of the hunger for the spirit that all men felt in the times that were then beginning. And the entire hunger of mankind discharged itself into the soul of Christ Jesus as the Mystery of Golgotha approached. The disciples were to participate in this secret and know of it.
Christ led them to the fig tree and told them the secret of the Bodhi tree, omitting to tell them, because it had no significance for them, that the Buddha was still able to fmd fruit on it. Now it was no longer the “time of figs,” figs that the Buddha had received from the Bodhi tree when he gave his sermon at Benares. Now Christ had to tell them that for all eternity the fruit of knowledge would never again ripen on the tree from which the light of Benares had shown down, but that hereafter the light would shine from the Mystery of Golgotha.
What is the truth that is presented to us here? The truth that Christ Jesus went with His disciples from Bethany to Jerusalem, and that a specially strong feeling, a specially strong force, was called forth in the disciples, awakening clairvoyant forces in their souls, so that they were predisposed toward imagination. Clairvoyant imaginative powers were awakened in the disciples. In clairvoyance they see the Bodhi tree, the fig tree, and Christ Jesus inspires in them the knowledge that the fruit of knowledge can no longer come from the Bodhi tree, for it is no longer the “time of figs,” that is, of the ancient knowledge. For all eternity the tree will be withered, but a new tree must grow forth, a tree consisting of the dead wood of the cross; a tree on which the fruit of ancient knowledge will not ripen, but the fruit that can ripen for mankind from the Mystery of Golgotha, which is linked as by a new symbol to the cross on Golgotha. In the place of that scene of world history when the Buddha sat under the Bodhi tree stands the picture of Golgotha where another tree, the tree of the cross, is raised, on which hung the living fruit of the God-man revealing himself, so that from Him may radiate the new knowledge of the fruit of the ever growing tree that will bear fruit to all eternity.
Source: https://martyrion.blogspot.com/2018/02/the-transfiguration-advance-from.html
Posted by Larry Clark at 5:37 AM