The Stages of Christian Initiation 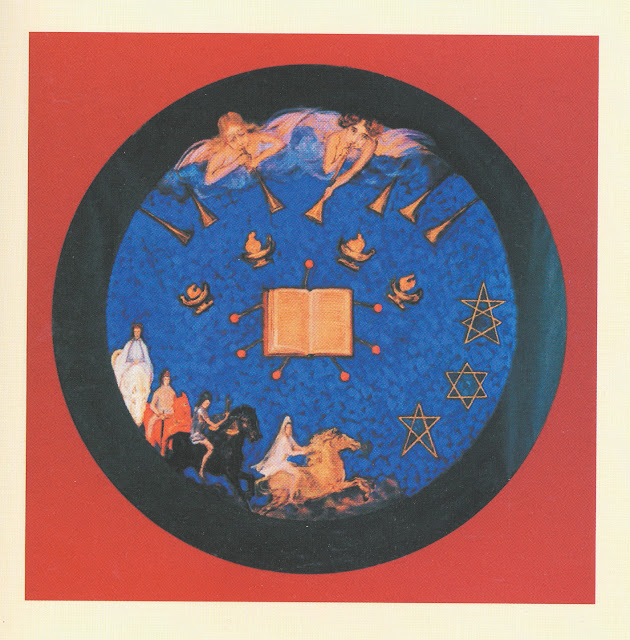 
“In the beginning was the Word and the Word was with God and the Word was a God. This was from the very beginning with God.
All things came into being through Him, and except through Him, was not anything made that was made.
In Him was the life, and the life became the light of men. And the light shone in the darkness, but the darkness did not comprehend it.
There was a man sent from God, whose name was John. The same came for a witness to bear witness of the Light, that all men through him might believe. He was not the Light, but a witness for the Light; for the true Light which lighteth every man had to come into the world.
He was in the world, and the world came into being through Him, but the world did not comprehend Him.
To each man He came, even to the Ego-men, but these individual men, these Ego-men, received Him not.
As many as received Him could manifest themselves through Him as children of God. Those who confided in His name are not born of blood, nor of the will of the flesh, nor of the will of man, but of God. And the Word became flesh and dwelt among us, and we have heard His teaching, the teaching of the only Son of the Father, filled with devotion and truth.”

I could now tell you many things of how you would have to immerse yourselves in each chapter of St. John's Gospel. Let me only give you one example — how you would have to use the chapters from the thirteenth chapter onward, if you were a true disciple of Christian Initiation. What I am telling you in words, has occurred in fact to render it more comprehensible, I will clothe it in the form of a dialogue, giving you an idea of what took place between teacher and pupil.
The teacher said to his pupil: — You must develop within you a feeling, you must think the following: Transfer yourself into the plant. If it had consciousness such as you have, and if this consciousness enabled it to look down to the stones, it would say: Thou lifeless stone; thou art a lower being than I in rank among the beings of this world; I am higher than thou. But could I exist as a plant, if thou were not there as stone? I draw my nourishment from thee. I could not exist without that which is lower than me.
And if the plant were endowed with feeling it would say: I am indeed higher than the stone, but I bow down humbly towards it, for the stone made it possible for me to live.
Similarly the animal would have to bow down to the plant and say: If thou; O plant, were not there, I could not exist, although I am higher than thee. To thee, a lower being, I owe my existence. Humbly I bow before thee.
Now rise up to the kingdom of man, survey the different human beings, the lowest and the highest, — what would each one have to say, who stands upon a higher rank of development than the others? Even as the plant bends down to the mineral and the animal to the plant; so each human being who stands upon a higher stage must bend down to those upon a lower stage and say; Thou standest upon a lower rank, yet to thee I owe the fact that I can be there!
Now imagine this carried out to the highest stages, reaching as far as Christ-Jesus, and you will have Christ's attitude towards the Apostles with whom He lived. He bent down towards them, even as the plant bends down to the mineral and washed their feet “I owe my life to you, and I bend down to you!”
For a long time the pupil had to pass through a scale of all these feelings. This feeling had to become more and more alive and then he awoke to the first stage of Christian Initiation. This can be felt through an outer and inner symptom: The outer symptom consists therein that the pupil really feels for a time as if the watery element were washing around his feet, and the inner symptom consists in the fact that he himself experiences the thirteenth chapter of the Gospel of St. John as an inner vision upon the astral plane.
The teacher then proceeded by telling the pupil: You must experience something else: you must now imagine that bodily and psychical pair and suffering rush towards you from every side; but you must arm yourself against everything so that you can say: However great the pain and suffering which come towards me, I remain upright, I do not allow myself to overthrown! This is called the Scourging. Its outer symptom is that one experiences on the skin's surface pains which are an indication that the soul has reached this stage. And the inner symptom is that one sees oneself upon the astral plane undergoing scourging. But the essential thing is that the soul gains in the form of inner experience.
The third thing which the pupil heard from his teacher was the following: Now you must develop a feeling that you do not only withstand every form of pain coming towards you, but that you remain upright and steady, even when the holiest within you is cast down into the dust. You must remain so strong, that everyone can tell you, This is worth nothing. But even though people trample on you, you must know its worth, and you must be able to withstand a whole world. — If the pupil reached this stage, he was said to have reached the “Crowning with Thorns”. The outer symptom is to feel a certain pain in the head and the inner one, to see oneself in the situation of the Redeemer with the crown of thorns.


The fourth thing was the following: The teacher told his pupil: You must gain a new connection with your body. You dwell in your body, but you must look upon it as something quite strange, even as the table outside is a strange object for you. You must even learn to say: I am carrying my body through the world. The body must become for you, as alien as other external objects. — This was said to be the experience of the Crucifixion. Even as the Redeemer carried the Cross, so one carried one's body about, as if it were a piece of wood. The outer symptom for the Crucifixion consists in the stigmata. During the meditation the pupil could produce on his hands, feet and on the right side of his breast the signs of Christ's bleeding wounds; red spots on these places reminded him of the Crucifixion wounds. This “blood trial” is an outer symptom showing that one has learned t0 know the inner essence of Christianity. And the inner experience is to see oneself on astral vision hanging upon the Cross.
The fifth stage is what one calls the “Mystical Death”. This can only be described approximately, The Mystical death consists for the pupil in the fact that the whole world appears to him as if it were enveloped in black darkness, as if a black wall stood before him. The whole physical world appears to him as if it were blotted out, as if it had disappeared. This can be experienced. It is a moment revealing everything bad and evil which can exist in the world (in reality, it can only be known through this experience). In order to know life one must also pass through this experience. It is called the “Descent into Hell”, and it is followed by a strange event appearing before one's eyes; that black wall is rent asunder. This is the “Rending Of the Veil of the Temple”. After this one cam look into the spiritual world. This is designated as the “Mystical Death and the Rending of the Veil of the Temple”.
The sixth stage is the “Burial and the Resurrection”, where the pupil learns to experience that in addition to the other feelings, all external objects appear as if they belonged to his body, that the whole world belongs to him. Even as the finger might say: I an only a finger through the fact that I belong to the organism of the hand, so the human being only lives upon the earth through the fact that he belongs to the earth. People can walk about upon the earth, and consequently they think that they are independent. But if we permeate ourselves with the feeling that everything belongs to us, we have the experience designated as the “Burial”. Soul-spiritually we rest in the earth and only after this experience we rise again, spiritually. Only then can we have an understanding of the deed of Christ-Jesus who united death with his own soul; and even as He has once been the Ruler of the Sun, He has now become the Spirit of the Earth. We should take the words of St. John's Gospel literally: “Whoso eateth my bread, treadeth me underfoot.” If you look upon Christ-Jesus as the highest planetary Spirit of the Earth, and the earth as His body, you will understand that you literally tread the body of Christ-Jesus with your feet. And you become united with Him when you experience this sixth stage, of the Burial.
Then comes the seventh stage, the “Ascension”, which cannot be described, for it can only be understood by those who can think without using their brain.
Now I have described to you the process of the Christian Initiation. The pupil acquired thereby what was called the “Eye of Christ”. Everything, around you would be dark if you had no eyes; even as you cannot see the sun without eyes, so you cannot perceive Christ without the Christ-organ. The eye is born through the light for the light. Light is the source of vision. The sun must exist outside as real sun, and you experience this real sun within your eye. It is the same with the spiritual eye. We use empty words when speaking only of the “Christ within”; it is the same thing as speaking of the eye without taking into account the existence of the sun! The capacity to look upon the Christ may be acquired through the exercises indicated above; but the power enabling him to do this, again conies from the historical Christ. Even as the sun is related to the eye, so the Christ is related to the Christ-organ which develops in the human being.
This is not meant as, a. guidance, but as an explanation of facts. We must learn to know what exists in the world. These, lectures aim at showing the deep sources of the truly Christian spirit, and how the Gospel of St. John itself contains the methods of a Christian Initiation, giving in man the eye which enables him to see Christ Himself. But those who wish to announce Him, must in a certain way have lived with Him, not only through faith, but in reality.