The Beginning of Time 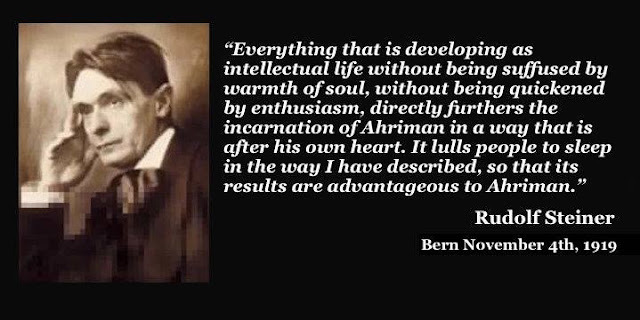 "Time is a result of sacrifice, and first arises as living time, as a creation of sacrifice."
Rudolf Steiner:
We can imagine the Thrones, the Spirits of Will, kneeling in absolute devotion before the Cherubim, but so that their devotion does not proceed from a feeling of littleness but from a consciousness that they have something to offer. Imagine the Thrones, with this desire of sacrifice founded upon their strength and courage, as kneeling before the Cherubim and sending up their sacrifice to them. ... And they send up this sacrifice as foaming heat, so that the sacrificial smoke ascends to the winged Cherubim. So might we picture it. And proceeding from this sacrifice (just as though a word of ours spoken into the air became time — in this case it is time-beings) and emerging from this whole proceeding: the Spirits of Time — Archai. This sending forth of the Archai gives a grand and powerful picture. And this picture placed before our souls is extremely impressive for certain imaginations, which can then lead us further and further into the realm of occult knowledge.
This is precisely what we have to attain; we must be able to transform the ideas we receive into imaginations, into pictures. Even if the pictures are clumsily formed, even if they are anthropomorphic, even if the beings appear as winged angels, etc., that does not signify. The rest will be given to us later; and what they ought not to have will fall away. When we yield ourselves to these pictures we penetrate into imaginative perception.
If you take what I have just endeavored to describe you will see that the soul will soon have recourse to all kinds of pictures unconnected with intellectual ideas. These latter owe their existence to a much later period, so that we should not at first take such things intellectually. And you must comprehend what is meant when some minds describe things differently from the intellectualists; the intellectualist will never be able to understand such minds.
Source: https://martyrion.blogspot.com/2021/03/the-inner-aspect-of-first-embodiment-of.html
Thank you, John Barnwell!
Posted by Larry Clark at 9:44 AM