From Symptom to Reality in Modern History. Lecture 1: The Birth of the Consciousness Soul 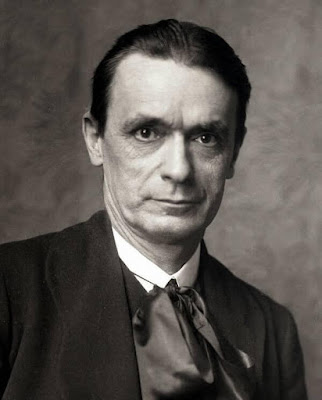 This phenomenon, strangely enough, manifests itself also geographically, especially when we consider another turning point in modern history as symptom — the defeat of Napoleon, who was a product of the French Revolution, by the English at the battle of Trafalgar in 1805. What is revealed to us here? Napoleon, a strange representative it is true, but nonetheless a representative of the French makeup, signifies the withdrawal inwards — and geographically too, the withdrawal to the continent of Europe. If the following diagram represents Europe — Napoleon, precisely as a consequence of the battle of Trafalgar, is thrust back towards Europe (see arrow) and England is thrust outwards towards the whole world in the opposite direction. At the same time let us not forget that these two tendencies have need of conflict, they must try conclusions with each other. And this is what happened in the struggle for supremacy in North America, which in some respects is a consequence of this turning point in 1805. Looking back a few decades before this date we see how the specifically French nuance, Romanism, is ousted in the interests of the world by the Anglo-Saxon element in North America.

Thus you can sense, if you really wish to, the forces which are at work here; like the magician's apprentice the impulse of the Consciousness Soul conjures up national impulses which implant themselves in mankind in divers forms and with different nuances. We can only understand these things if we study the impulse of the Consciousness Soul in all its aspects, avoiding all prejudice and keeping our eyes open for what is important and what is unimportant and also for what is more or less characteristic so that from our observation of external symptoms we can then penetrate to the inner pattern of reality. For external appearances often belie the inner impulse of the personality, especially in an epoch when the personality is self-dependent. And this, too, becomes apparent when we study symptomatically the development of modern history. What is taught as history in our schools is quite unreal. The real facts are as follows: here is the surface movement of the water, here is the current (shaded red in the diagram.)

Now there are times when there breaks through into historical events — like the waves thrown up here, sometimes with the violence of a volcanic eruption — what lies beneath the surface. At other times, events emerge on the surface, and isolated historical events betray what lies beneath the surface. As symptoms they are especially characteristic. But sometimes there are symptoms where one must totally ignore external appearances when looking at the symptomatic fact.
Now there is a personality who is especially characteristic of the emergence of the impulse of the Consciousness Soul in Western Europe, both on account of his personal development and on account of the place he occupies in contemporary history. At the beginning of the seventeenth century he was involved in this differentiation between the French impulse and the English impulse, a differentiation that had exercised a widespread influence upon the rest of Europe. In the seventeenth century this differentiation had been effective for some time and had become more pronounced. The personality who appeared on the stage of history at this time was a strange individual, whom we can depict in the following way: one could say that he was extremely generous, filled with deep and genuine gratitude for the knowledge imparted to him, infinitely grateful, in fact a model of gratitude for the kindness men showed towards him. He was a scholar who combined in his person almost the entire erudition of his day, a personality who was extremely peace-loving, a sovereign indifferent to the intrigues of the world, wholly devoted to the ideal of universal peace, extremely prudent in decisions and resolutions, and most kindly disposed towards his fellow men. Such is the portrait that one could sketch of this personality. If one takes a partial view, it is possible to portray him in this way and this is the external view that history presents.
It is also possible to portray him from another angle which is equally partial. One could say that he was an outrageous spendthrift without the slightest notion of his financial resources, a pedant, a typical professor whose erudition was shot through with abstractions and pedantry. Or one could say that he was timid and irresolute, and whenever called upon to defend some principle he would evade the issue out of pusillanimity, preferring peace at any price. It could also be said of him that he was shrewd or crafty and wormed his way through life by artfully choosing the path that always guaranteed success. Or that he endeavoured to establish relationships with others as children are wont to do. His friendships betrayed a frankly childish element which, in his veneration for others and in the adulation others accorded him, was transformed into romantic infatuation. One can adopt either of these points of view. And in fact there were some who described him from the one angle, others from the other angle, and many from both angles. Such was the historical personality of James I [ Note 12 ] who reigned from 1603 to 1625. Whichever point of view we take, in both cases the cap fits perfectly. In neither case do we know what he really felt or thought as a typical representative of contemporary evolution. And yet, precisely in the epoch when James I was King of England a hidden current rises to the surface and the symptoms manifested at that time are characteristic of the underlying reality. We will speak more of this tomorrow.