Regarding our etheric body 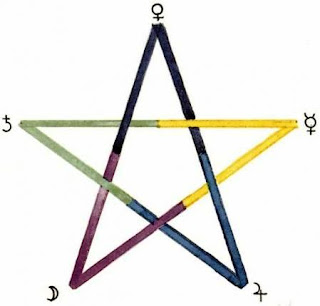 Through intuitive knowledge, the whole relationship in which the human being as “soul” finds himself with respect to his bodily organization is altered for the direct observation of the inner being of the soul. Before the faculty of spiritual vision, the etheric body appears, in a sense, as a supersensible organism differentiated within itself. And one recognizes its differentiated members as adapted in a definite way to the members of the physical bodily organization. The etheric body is experienced as the primary entity and the physical body as its copy, as something secondary. The horizon of consciousness appears to be determined through the law-conforming activity of the etheric body. The coordination of the phenomena within this horizon results from the activity of the differentiated members of the etheric body striving toward a unity. The etheric body rests upon an all-embracing cosmic web of laws; basic in the unification of its action is the tendency to relate itself to something as a center. And the image of this uniting tendency is the physical body. Thus the latter proves to be an expression of the World Ego, as the etheric body is an expression of the macrocosmic web of laws.
What is here set forth becomes clearer if we refer to a special fact of the inner life of the soul. This shall be done with reference to memory. As a result of the freeing of the self from the bodily organization, the spiritual researcher experiences the act of recollecting differently from one with ordinary consciousness. For him, recollecting, which is otherwise a more-or-less undifferentiated process, is separated into partial factors. At first, he senses the attraction toward an experience which is to be remembered, like a drawing of the attention in a certain direction. The experience is thus really analogous to the spatial directing of one's look toward a distant object, which one has first seen, then turns away from, and then turns toward again. The essential aspect of this is that the experience pressing toward remembrance is sensed as something which has stopped far away within the temporal horizon, and which does not merely have to be drawn up from the depths below in the soul's life. This turning in the direction of the experience pressing toward remembrance is at first a merely subjective process. When the remembrance now actually occurs, the spiritual researcher feels that it is the resistance of the physical body which works like a reflecting surface and raises the experience into the objective world of representations. Thus the spiritual researcher feels, in connection with the process of remembering, an occurrence which (subjectively perceptible) takes place within the etheric body and which becomes his remembrance through its reflection by the physical body. The first factor in recollecting would give merely disconnected experiences of the self. Through the fact that every remembrance is reflected by being impressed upon the life of the physical body, it becomes a part of the ego-experiences.
From all that has been said it is clear that the spiritual researcher comes to the point in his inner experience where he recognizes that the human being perceptible to the senses is the manifestation of a human being who is supersensible. He seeks for a consciousness of this supersensible human being not by way of inference and speculation based upon the world that is directly given, but, on the contrary, by so transforming his own condition of mind that this ascends from the perceiving of the sense-perceptible to real participation in the supersensible. He arrives in this way at the recognition of a content of soul which proves to be richer, more filled with substance, than that of ordinary consciousness.
What this road then leads to further can only be suggested here, of course, since a thorough exposition would require a comprehensive treatise. The inner being of the soul becomes for the spiritual researcher the producer, the builder, of that which constitutes the single human life in the physical world. And this producer manifests in itself that it has — interwoven into its life as realities — the forces not only of the one life, but of many lives. That which may be considered as evidence of reincarnation, of repeated earthly lives, becomes a matter of actual observation. For what one learns of the inner core of the human life reveals, one might say, the telescoping together of interrelated human personalities. And these personalities can be sensed only in the relationship of the preceding and the succeeding. For one which follows is always manifested as the result of another. There is, moreover, in the relationship of one personality to another no element of continuity; rather, there is such a relationship as manifests itself in successive earthly lives separated by intervening periods of purely spiritual existence. To the observation of the soul's inner being, the periods during which the core of the human being was embodied in a physical corporeal organization are differentiated from those of the supersensible existence through the fact that, in the former, the experience of the content of the mind appears as if projected against the background of the physical life, while in the latter it appears as merged in a supersensible element which extends into the indefinite.