It will depend on human beings how these forces, bestowed upon the world through death-sacrifices, will be embodied in the evolutionary process of the Earth. They serve the evolutionary process of the world through the fact that they can inspire us with what spiritual science has kindled. If materialism were to take hold of every mind, or if nationalism were to spread out exclusively in the form of passion, then Lucifer and Ahriman would be able to use these forces for their own end and in that case these forces would be unable to further the progress of the Earth. If we consider these connections, then the deep significance which spiritual science has for human development on Earth rises up before us. And only then shall we be able to say: In order that these forces, sacrificed through death, may be rightly used for the progress of human development, it is necessary that the new spirit, which is the outcome of spiritual science, should take hold of those human beings who are capable of grasping it. If we consider spiritual science in  connection with the spiritual process of evolution, which comes to the fore so clearly in these fateful days, then we realize that spiritual science is something tremendously great and sacred. The new spirit which can be acquired through spiritual science thus becomes something that may be compared with the mood of prayer and it may be comprised in the words:

O cosmic spirit, let us be completely filled with the spirit that grows out of spiritual science; so that we may not fail to wrest from Ahriman and Lucifer that which can be of help to the Earth, for its salvation and its progress! 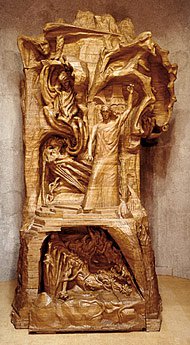 Source: http://martyrion.blogspot.com/2012/08/the-etheric-body-as-reflection-of.html
Posted by Larry Clark at 6:21 AM