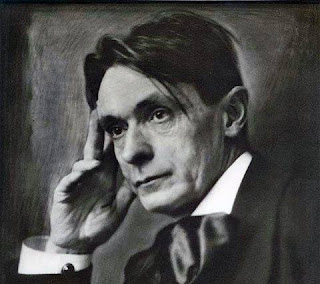 The National Epics With Especial Attention to the Kalevala

A lecture given by
Rudolf Steiner
Helsingfors, Finland, April 9, 1912


creative power remodelled all matter in an artistic way, so that it could become human matter. Then again, they looked upon the third, upon the spiritual or consciousness soul which really makes the ego-man, which is the transformation of the physical body, and they ascribed those powers which rule in the physical body solely to the line of heredity, to that which is derived from father and mother, from grandfather and grandmother and great-grandfather, in short, to that which is the result of the human powers of love, of the human powers of propagation. In that they saw the third creative power. The power of love works from generation to generation. The old clairvoyant looked up to three powers, to a creative being who ultimately calls forth the sentient soul, in that it fashions the astral body in man which man had before he became a physical being through conception, the body which man will have when he has passed through the gates of death. This structure of forces — we might rather say — this heavenly structure in man which lasts on when the etheric body and physical
body pass away, was at the same time to the old clairvoyants their direct experience proved this — that which could bring all culture and civilisation into human life. Therefore in the producer of the astral body they saw that power which brings in the divine, which itself only consists of the permanent, and by means of which the Eternal rings and resounds into the world. And the old clairvoyants from whom — I say it without fear — the characters in Kalevala have sprung, have represented in Väinemöinen the active, plastic form of that creative power whose results we encounter in the sentient soul which inspires the divine in man, Väinemöinen is the creator of that principle of the human body which endures beyond birth and death, and which brings the divine into the earthly. And we look at the second figure in Kalevala, Ilmarinen; if we go back to the old clairvoyant consciousness, we find that Ilmarinen brings forth everything that is copy or image, in his active moulding of the etheric body, from out of the forces of the earth, and from that which does not belong to the material earth, but to its deeper forces. We see in Ilmarinen the producer of that which fashions and grinds matter. We see in him the forger of the human form. And we see in the Sampo, the human etheric body, forged by Ilmarinen out of the super-sensible world, whereby material matter is pulverised, and can then be tarried on from generation to generation, so that in the powers which are given by the third super-sensible divine being, through the powers of love continued from generation to generation, the human spiritual or consciousness soul works on further in the human physical body. We see this third super-sensible divine power in Lemminkäinen. And thus in the forging of the Sampo we see the profound mysteries of the origin of humanity. We see profound mysteries from the ancient clairvoyant consciousness at the back of Kalevala, and thus we look back into human antiquity of which we have to say; that was not the age when one could have analysed the phenomena of Nature by means of the intellect; everything was primitive; but in the primitive lived the perception of what stands behind the material. Now it was so that when these bodies of man were forged, especially when the etheric body of man — the Sampo, was forged that it had first to be wrought upon for a time; did not at once possess the forces which were prepared for him by the super-sensible powers. Whilst the etheric body was being forged, it had first to grow accustomed to itself inwardly; just as when a machine is being prepared it must first be made ready, them as it were, fully matured, in order to be made use of. In human development — this shown in all evolution — there had always to be an interval between the creation of the principle in question, and the using of it. Thus man's etheric body was fashioned in remote primitive times; then came an episode when this etheric body was being sent down into human nature. Only later did it shine out as the intellectual soul, and man learnt to use his powers as external powers of nature; he brought forth from his own nature the Sampo which had remained concealed. We see symbolically in a wonderful way this secret development in the forging of the Sampo, in the concealment of it, in the inefficiency of the Sampo, in the episode which lies between the forging, and the rediscovery of it. We see the Sampo first sunk into human nature, then brought forth to the external powers of civilisation, which appear first as primitive forces just as they are described in the second part of Kalevala. Thus everything in this great national epic gains a profound significance when we see in it clairvoyant descriptions of the ancient occurrences in human development, of the coming into being of human nature in its various principles. I can assure you that to me who only learnt to understand Kalevala long, long after these facts regarding the development of human nature stood clearly before my soul, it was a wonderful, amazing fact to find again in this epic that which I had been able to represent more or less theoretically in my “Theosophy”, which was written at a time when as yet I knew not a line of Kalevala.